We find out about how attending Introduction to Mechanics sessions at 15 years old put Stephen Tolland on his journey to becoming an automotive trainer. 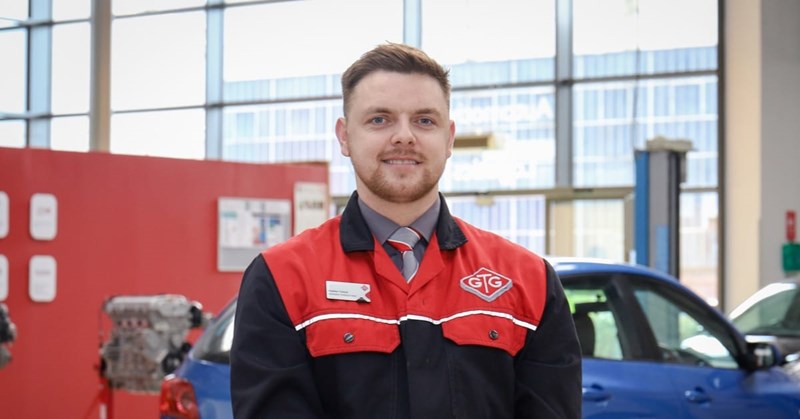 Settling into his latest role, Stephen Tolland is loving life at GTG Glasgow as an Automotive Technical Trainer.

And he has come a long way, having been inspired to take up the career path by a GTG course he took while still at school.

Stephen explained: ‘I started an eight-week training course called Introduction to Mechanics in S4, visiting GTG Glasgow every Thursday to learn and practice basic automotive skills around suspension, steering, brakes, wheels and tyres. That's when I caught the bug to get into the automotive industry, and I decided to leave school a year later at 16 and pursue it.’

But it wasn’t a tale of instant success for Stephen, and he had to patiently wait for a full-time opening into the automotive industry.

‘I secured a temporary role working as a tyre fitter on a six-month Skill Seekers course through Skills Development Scotland, but was then back working for a clothing retailer. But I was constantly pursuing a career with Arnold Clark, and when I was offered a Modern Apprenticeship with the company at 17, I was determined to complete that.’

And even as a qualified technician, progression in the automotive industry didn’t stop there for Stephen, who was keen to keep learning and honing his skills as Arnold Clark gave him more opportunities to train beyond his apprenticeship.

He said: ‘During my time at Arnold Clark and GTG I’ve been put through all the training that I could have wanted. Earlier in my time as a technician I went to GTG for various courses like Air Conditioning, Advanced Diagnostics and MOT Testing. I was then sent down to Daventry in Northamptonshire to train with Ford, to become a specialist technician in fields like powertrains and electrics.

‘From there I was promoted to workshop foreperson/controller at the age of 24. And what’s reassuring is that there is always an opportunity to progress with Arnold Clark. Now, as an automotive trainer, I get the chance to share my knowledge and experiences with other young apprentices, and with adults deciding to pursue a career in the automotive industry.’

And Stephen has one person in particular to thank for encouraging his interest in all things automotive: his Introduction to Mechanics teacher, John McCulloch.

John, who has worked at GTG Glasgow for 15 years and is now the centre’s Automotive Manager, spoke of his pride at seeing a young student so determined to forge a career in the industry.

He said: ‘It’s really satisfying to think that the course we ran inspired Stephen to the point where he is time-served with experience as a technician, and has since gone on to become a trainer. To hear that kind of story is really fulfilling. When I think about what my aims were in my previous role as a mentor, one of them was to inspire others into getting into the industry.’