As a woman in transporter driving, Emma Morrell is something of a pioneer in the industry. 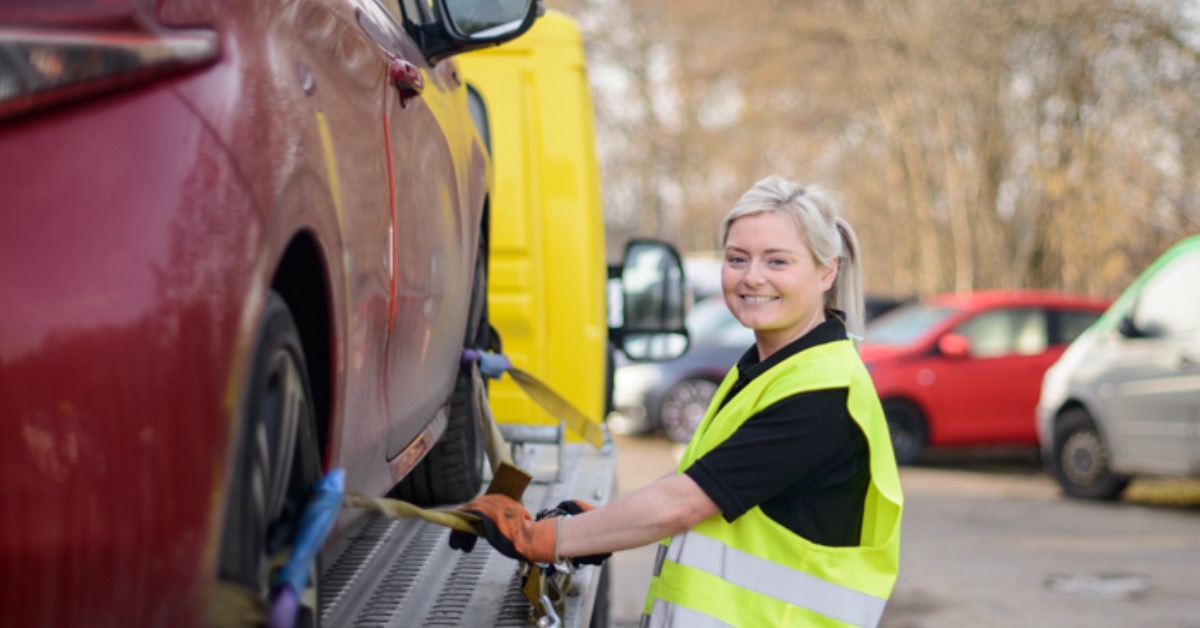 One transporter driver is well into her driving career journey - and is breaking down transport industry barriers with every mile she travels.

Emma Morrell, who has driven for Arnold Clark for the past four years, started out as a trade plate driver, and more recently, has started driving large trucks with sizeable, and valuable, loads across the UK.

And despite Emma going from driving individual cars to and from different branches for Arnold Clark to driving three-car transporters, she admits she had never really wanted to be a transporter driver – but is so glad to have taken a training route into driving bigger vehicles.

She said: ‘I didn’t have plans to drive car transporters and was really enjoying my work driving cars before going onto the one-car transporter vehicles.

‘We usually imagine big, strong men driving larger lorries, and often in the industry there is a family pull, a connection passed down from generation, such as father to son. That’s often how people get into HGV driving.

‘I didn’t have that lorry-driving background, so I hadn’t thought about doing it. But David Green, the Transport Manager at Arnold Clark, encouraged me to go for it, to train for my Class 2 HGV licence. So, I guess you could say with the right advice, I sort of fell into it; I was in the right role at the right time.’

After obtaining a Class 2 HGV licence (for driving rigid heavy goods vehicles) through a week’s training at GTG Glasgow, Emma found the idea of driving HGVs seriously daunting, but soon found her feet in the larger lorries – and was able to draw on some of the skills she had learned in the single-car movers.

‘Almost two years after completing my Class 2 HGV licence and getting out on the road in the bigger lorries, I’m really glad I did, and that I was encouraged to train and progress in my driver role’, Emma said.

‘Training methods have had to be adapted for the pandemic, but I learned before that, and it was myself and another learner in the cab with the instructor, Debbie, who was excellent. She explained everything really well, and I felt I was as prepared as I could be for my driving assessment and for situations which I might not otherwise have pictured myself coming across when out on the road.

‘Driving three-car transporters, I still draw on good habits from driving the one-car version, such as giving myself extra room when turning. That gave me a big boost as I felt with both my training and prior driving experience, I was well-prepared do my new role. That said, I hardly ate for a week when I thought about going out on the road for real, and even with the kinder automatic shift on the rigid HGV helping, it’s hardly a breeze – but you soon get the hang of it!’

Emma also described some of the on-road elements a potential driver needs to watch out for when driving for real.

She said: ‘If you drive with confidence, and more importantly, you enjoy driving, you can deal more easily with unexpected situations which will inevitably arise.

‘You’re driving different roads, seeing different scenery from your cab, but that means various challenges on any given route, such as hills, declines, roundabouts, low bridges – all things you must prepare for on your route.

‘Often I am thinking two miles ahead on any driving day, so it’s important to be organised and research your next route in advance, such as the day before.’

And after working hard to master the dimensions of a three-car transporter, Emma wants to progress on to drive even larger transporter vehicles, and hopes that with some changes to industry infrastructure, herself and more women will be able to work further afield more commonly.

Emma added: ‘I don’t tend to work away overnight and I’m normally back to my home branch at the end of each day. Being safe and having adequate facilities at rest stops are big issues for women in transport who work away for consecutive days, so I hope that as time passes, the facilities will get better (with more emphasis on safety), there will be more opportunities to progress and to drive even larger vehicles, and to drive further afield.

‘I always feel that I’ve got the support and encouragement from my colleagues and managers, so I know that I have it in me to progress within the driver’s role, and that I will have the chance to train for them.’

David Green, Transport Manager at Arnold Clark, said: ‘Emma worked driving trade-plated cars between our branches, and clearly had the skills to move into driving lorries, and getting her Class 2 HGV licence was essential in order to do this kind of work.

‘Having now achieved that, she is now driving three-car transporters on a daily basis.’

Want to be a transport trailblazer? Find a range of training courses, available at our three world-class training centres.